Could you explain why you have decided to listen to the sound of bridges and how it became a long term project ?

When Wolfgang was a child and somebody asked him what he wants to be, he always answered „a cave explorer“ (speleologist). Later, he was engaged in many underground music projects. Scratching the bridges, is at least a bit like exploring caves or the underground with the help of tentacles.

Bridges, scratches and sounds often played an important role in our work: Christiane did a performance in London called „recently I met a dog“ (2009). She walked over the millenium Footbridge away from Tate Modern barefoot in wintertime, wearing very strange cloths. She didn’t make it to Tate Modern but the video was screened at Thessaloniki Biennale. One year later, she worked with an old tree which was „scratched“ by russian soldiers in Potsdam after the second world war who carved it with their names and wishes. At the same time, Wolfgang worked with field recordings and soundscapes of boat sounds and did live sound performances.

On the boat, you always have to be careful when you pass a bridge. It is narrow, the current is strong and you have to know in advance how high the bridges are to know if it is possible to travel on this specific waterway. So bridges are important in our daily life.

Before starting the Tentacles project, we did several bridge related works like „Styx“(2012), a video, showing just a continual view of the downside of bridges (but we were not happy with the sound) or „the song of the bridges“(2011), a project for St. Petersburg in Russia. In Berlin/ Neukoelln, we placed an empty concrete cube on a frequented square „inside/outside“ (2012). People could climb inside and experience the changes of atmosphere and acoustic - it was very much like passing under a bridge. We also did some works transfering or translating architecture into audiovisual installation.

After all that, it was just one step further when Christiane got the idea to try bridgescratching. And it was obvious that, if we do that, we should do it as a long term project with as many samples as possible. The possibility to publish the photos and sounds in the mobile App SoundWays made it possible to establish a bridge sound map that resembles an audio walk.

What do you prefer, navigating and field recording bridges ? organizing these sounds in a composition named Tentacles, imagining a performance for a gallery ?

The best is the combination of the both. Navigating and scratching bridges to places where we rest having the time and the space to get into distance to this daily work and then create an installation.

What is your purpose with the audience ? Do you want people to open their ears (and hearts) to a soundscape ?

Maybe just to open up for the so far unknown, no matter visual or auditiv even when it is not so easy accessible....

The visual part for us plays an important role too. So why not just art? Or simply bridgescratching?

What is your relationship to your environment ? You’re living on a boat for 7 years (right ?), you have been travelling from Berlin to Arles for Tentacles project, are you in a certain way testimoning of a vanishing soundscape (I mean that we are surrounded by pictures all over the internet, we take images of our trips, we live inside images but we are not so conscious of the sounds that « signs » a city or a bridge) ?

It’s almost 9 years on the boat already...It is not just the audible part but the combination between the visual (the tentacles on the boat, the scratching as a visual performance) and the hearable that is the challenge for us. And- yes, for sure , the life on the boat -always with a small distance to what happens in the not-waterworld as we say in German not „auf dem Boden der Tatsachen“ (not on the base of facts)- affects the perception of images and sounds.

Beside of the always increasing flood or stream of images, at the same time we are exposed to an increasing stream of noise. It starts at the almost unlimited storage capacity for songs on our hard disk devices and ends at the permanent exposure to extremely silly music at places that Marc Auge called non-places (like waiting areas in airports or in shopping malls). This music and the music at „acoustic non-places“ like endless waiting queues in telephone lines is a real aggression towards the sensual perception. In addition to that, it is always getting harder to find places where it is possible to identify a certain sound because everything drowns in a cacophony of noise from traffic, construction sites, factory noise emission and so on. Only some hundred years ago, it was essential for the surviving of mankind to have the ability to identify for example the sound of an animal while hunting or to distinguish the sound of the cattle beside the home from the sound of an enemy approaching. We are loosing an essential sense while the noise produces more and more stress.

In some way, bridges provide a protection against this noise. That gives us the possibility to do those special scratching recordings. On the CD you can hear a big difference between the tracks recorded in Berlin or Paris or for example the track of the bridgesounds between Paris and Lyon where the bridges are quite low and often located in plain nature and the scratch sounds are very pure and transparent.

How would you qualify your relationship to your recordings ?

It is a self surprising experience that teaches even us how much we are used to certain listening habits and what a difference a bridge makes...

Are bridges in Berlin sounding bigger because the city is bigger ? Can you recognize the size of a bridge with its sound ?

Yes, we can recognize the size of a bridge by its sound- and also its height . In cities, bridges usually sound bigger, because the constant noise around embeds them into a larger soundscape. Berlins bridges are mostly quite wide but not high, so the echo is strong...

When did you have the idea to use these «tentacles » and can you explain your experiments to achieve the right soundscape for this journey ?

The idea of using Tentacles arose in early 2014. First we tried Bamboo but it was not flexible enough. After that, we did experiments with elastic foam surrounded by flexible aluminium tubes. That looked quite interesting but the length was not as adjustable as it had to be for different bridges reaching from 3.50 to 15 meters height. We also tried to shoot marbles with a slingshot from the passing boat to the bridges and to record the sounds. When we did our first scratches with the adjustable carbon fibre canes, we installed different sounding objects at the top of the canes, but that was not practicable. They got hooked inside of the bridge structure and the canes broke or the objects fell down- so we ended with the pure carbon fibre canes which worked the best in the end.

Before scratching bridges, you had been catching wind for the Documenta 13. What’s your next long term project ?

This one is not finished yet! This year, we were connecting the so far scratched waterways with the Baltic Sea, next year we will make it to the Atlantic side. To travel to the Black Sea via the Danube would also be worth trying...and the Nile and the Ganges...why not?

Are you aware of other artistic works concerning bridges (I think of Jodi Rose and her Singing Bridges project?

Yes, we know and we like the work of Jodi Rose. There are several other artists working with bridges, playing them like instruments like the NY artist Joseph Bertolozzi or the German Christian von Richthofen. Susan Philipsz placed speakers under a bridge in Muenster for her installation „the lost reflection“(2007). On the visual side, there is for example the „old bridge“ (1998) by Emilia & Ilya Kabakov, an inaccessible bridge, almost invisible with only the outline left. There is a German movie from 1944 „under the bridges“ with very elaborated soundscapes of all kind of bridge and boat sounds: a young woman wants to kill herself by jumping from a bridge but then she is saved by some sailors. From Van Gogh (we passed the famous bridge he painted in Arles) to the French movie „The lovers from Pont Neuf “, bridges seem to attract artists and suicidal persons. In the big cities, you hardly pass under any bridge without seeing all that graffiti art. Scratching bridges has a bit of all that: the somehow aggressive and illegal act of scratching, the trying to communicate, the underground atmosphere, the rhythm....So let’s say it with the words of the godfather of soul music, James Brown: „let me take you to the bridge....“

(conceptual art that searches the psycho-acoustic contact and, with a striking cut, provides a sensual perception of moving local exploration ......)

Mindfulness reigns over the contemplative performance of Kg Augenstern’s “Tentacles”.

...not only an especially tactile aural diary of the journey but also a sound document that sensitizes the listener to the subtle differences in sound properties....

....a fascinating and engrossing project.....

...creating a tactile sound, almost sculptural in its frictional effects, which always return to spaces and architectures. The sounds are literally scraped from the surface but also diluted in the flow of the narration of each crossing.

(and it`s not only about the architecture of bridges, by listening very carefully, it gives us an idea, that the sounds are individual, one by one..)

(...they are exploring on their boat "Anuschka" a sound art of navigation...

While listening, you participate in the journey, strange and poetic, revealing an intermediate world between field recording and artistic gesture.)

(The sound layers which can be found on the album "Tentacles" are hard to compare with anything. Its character makes, that we associate a sort of unreal, isolated (ignoring the sounds of birds, cars, fragments of conversations) zone of psychoacoustic audio experience strongly resonating with the perception of the listener.)

The duo KG Augenstern, made up of Christiane Prehn & Wolfgang Meyer, recently sailed their houseboat from Berlin to Kassel, collecting a ten-liter jug of wind every hour of the journey, complete with details of location, temperature, humidity and air pressure, plus a photograph. During the recent heat wave, they released some of this fresh air into the Kassel environment, alongside a display of the jugs that migrated each day with air currents. Dockside at the Fulda, they put on a screening each night of a Berlin power plant smokestack, sited just so that it turned their boat into an old steam ship. Except it’s not actually their boat, because their boat got stuck in Minden when hot weather lowered the depth of the river.

This is not an uncommon occurrence—water is often kept in the Edersee on account of leisure activities, leading to problems for commercial shippers. And that’s not to mention the controversy surrounding the Kassel locks, which are going to shut next year and isolate this stretch of the Fulda. It’s hard to be funny or strange when water and air are at stake, so it’s no perhaps understandable that the field of ecological art is not usually known for its sense of humor, and even less for its surrealism. Fortunately for the rest of us, KG Augenstern have been on their boat for so long, no one told them. 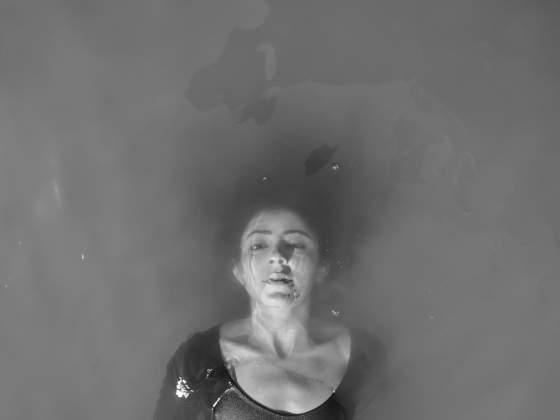